It’s my understanding that Library and Archives Canada may be negotiating to acquire these or photos similar to the ones below, but they don’t yet have them.  The images offered here today are enlargements of half-tones in Jean Côté’s 1994 book, Adrien Arcand, Une grande figure de notre temps (ISBN 2-9801677-3-8), scanned by archive.org.  In an effort to clear them up, I’ve done a little Photoshopping.

While Ernest Lapointe was Minister of Justice in Ottawa, the French-Canadian detainees, deemed stateless, endured a thousand harassments.  If they refused to work, they wound up in a cell.

Major Maurice J. Scott.*  A strict disciplinarian, he drills his legions – without arms, but in military formations – to a major-general’s taste.

Major Maurice J. Scott*, or “Drillmaster Scott,” as Frederick Edwards dubbed him for Maclean’s on February 15th, 1938, was “Director General of the Fascist Legions” of the National Social Christian Party, which became the National Unity Party of Canada on July 1st, 1938 at Kingston.  Said Maclean’s:

“Major” Scott died during his internment.  The Canadian authorities — inhumanely — denied him the right to see his family before he died.

“Major Scott, in spite of his name, is French-Canadian too, descendant of an old Quebec family with mingled Scottish and French ancestry dating back several generations.  Before he started on his present business career as coal, coke, oil, and wood merchant, with a side line of automobile insurance, he was for many years a chief of the Quebec Liquor Com­mission’s private police force, ferreting out liquor smugglers and digging up illicit stills for the manufacture of ‘whiskey blanc’ in the remote backwoods.  Among the mountains of the Southern United States he would have been that much-hated individual, a ‘revenooer.’  The Major comes quite properly by his military title, for he served as recruiting officer and physical instructor with the Eighty-fifth Battalion, C.E.F.  In his youth he was an athlete of note and a member of several Canadian gymnastic squads touring in Europe.  He was on the Canadian Olympic teams of 1908 and 1912, and he claims that in the past twenty years he has trained more than 150,000 youngsters in the numerous French cadet corps in Montreal.

“Stocky and muscular and bald, with a stern mouth set in firm lines, Scott bears a faint resemblance to Mussolini, just as the slender, black eyebrow-mustached Arcand looks something like Sir Oswald Mosley.  The major has a supreme disdain for per­sonal popularity, since, both as a Liquor Commission copper and a C.E.F. recruit­ing agent among the French-Canadians, he never enjoyed any particular good will.  A strict disciplinarian, he drills his legions – without arms, but in military formations – to a major-general’s taste.  Powerful and fit, he is well able to take care of himself in a rough and tumble.  Under his instruction, Arcand’s followers have developed an exact and highly technical routine for chucking Communistic disturbers out of their meetings.  Major Scott acts as body­guard for his leader, who often moves abroad among hostile mobs.”  (The words “without arms” have been underlined because Arcand forbade them to carry weapons, even a small nightstick.) 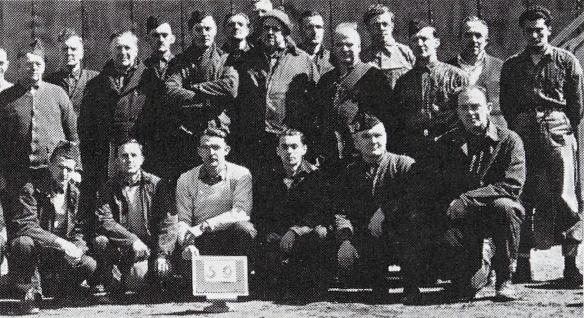 Arcand’s men — political battle companions in arbitrary detention under the pro-Red Liberals.  They were Christian patriots and nationalists, with a constitutional right to be so.  Arcand and his men were interned at two locations in World War II, Petawawa camp in Ontario and Fredericton camp in New Brunswick.  The group in this photo spent the war in the Fredericton camp.  Photo from 1943. 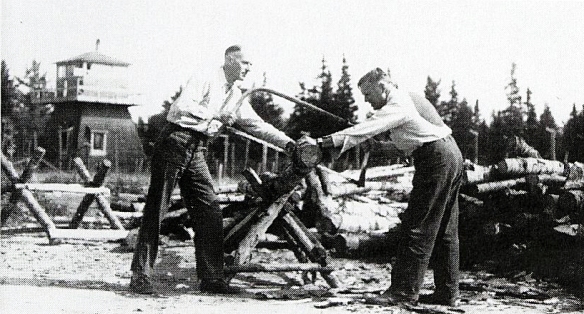 Splitting or sawing wood was not a typical form of exercise for Adrien Arcand, whose constitution was rather frail.  “Chief,” said “Major” (Scott), “you’re going to collapse”.  Arcand was frail because he had been ill in his youth.  He spent nine months in bed when a Spanish influenza epidemic left 43,000 dead in Canada, 13,000 of whom were in Quebec, and of those, 3,000 were in Montreal where Arcand was born and lived.  Sources: Adrien Arcand, Une grande figure de notre temps (1994) by Jean Côté; A Short Biography of the Life of Adrien Arcand, NUPC, 1983. 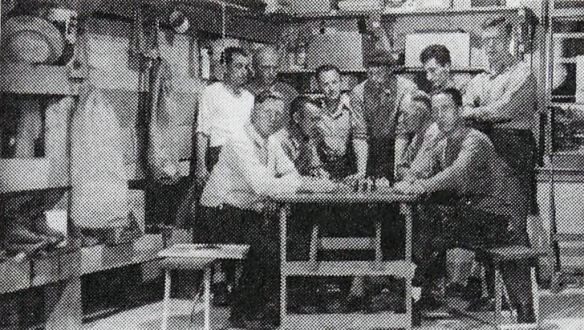 Adrien Arcand liked a good game of checkers.  Can you pick him out in here? 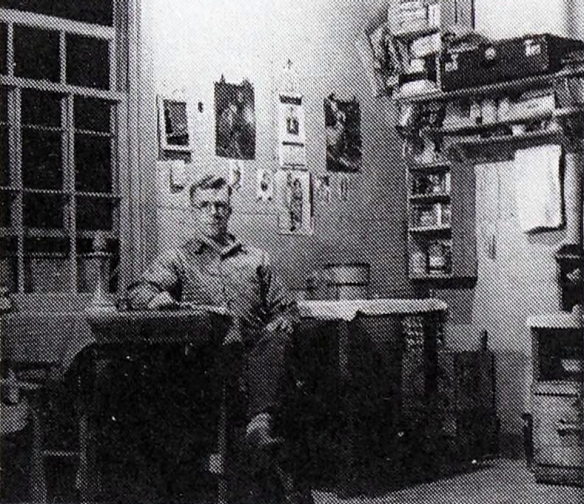 Gérard Lemieux, one of Arcand’s faithful.

Two of Arcand’s men while away the internment with a little culture.  Concert, anyone?

In the concentration camp, everyone has a corner all to himself.  Arcand built a little “home away from home” to sit and work.

A view of the concentration camp at Fredericton where Arcand was interned, with its barbed wire, its hole, its watchtowers.  For the whole war, more than 400 detainees were kept under watch.  There was a group of German prisoners of war who were kept in a separate “compound” and a number of Italo-Canadians and the 80-some members of the National Unity Party … in their own little corner.

Shots of Petawawa Courtesy of Getty