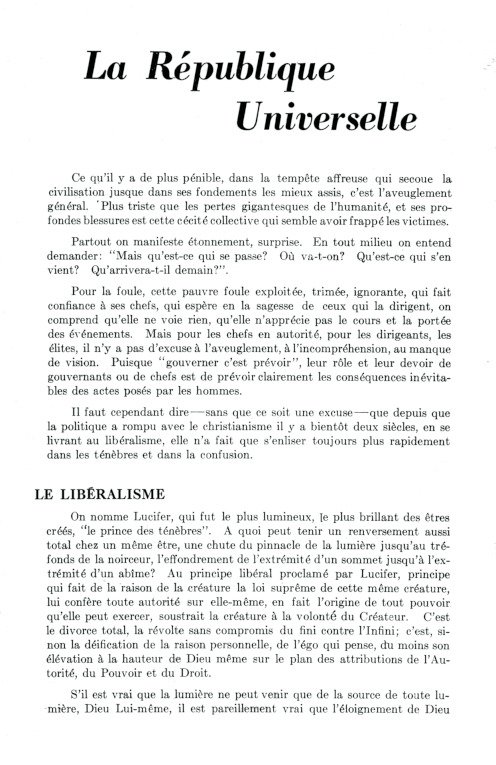 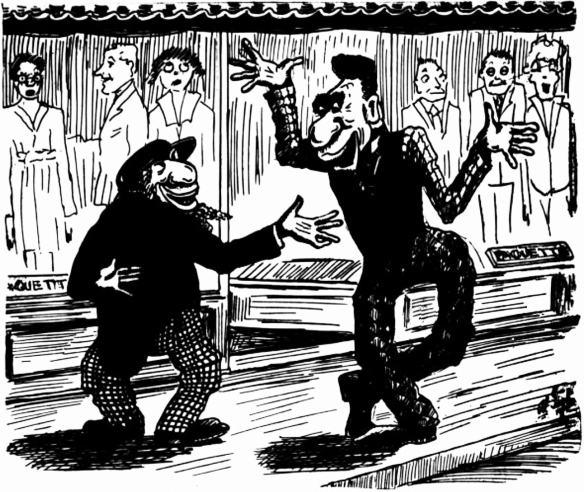 THE ART OF SUCCEEDING AND DOMINATING IN QUEBEC
THE NEWLY ARRIVED JEW FROM PALESTINE:  “You seem prosperous, brother Israelite.  But you appear to be just an employee, because the name on the store isn’t Jewish.”
THE MERCHANT:  “If I had a Jewish name on the sign, the Christians wouldn’t come in.  So, I take a French name and they all flock like sheep.  These good Christians!  They have no idea how to stand up for themselves, they do their best to weaken their race, and make ours strong and rich so that Israel can dominate Canada faster.  Take my word, brother Israelite, move here, because Quebec is a veritable Promised Land and the government gives us all we demand.”  From The Goglu of June 6th, 1930.

My WordWeb desktop dictionary from Princeton defines the noun “antisemitism” as “The intense dislike for and prejudice against Jewish people”.  The “adjective”, “antisemitic”, we are told, means “Relating to or characterized by anti-Semitism; hating Jews”.

In our day, these words certainly have these meanings, in fact they are clichés. They are not used intellectually, or academically, but as propaganda (in the pejorative sense) by Jews and a legion of others to control public opinion, public behavior; and in other quarters to curry favor with the notorious “Money Power”.

Even a former member of Israel’s Knesset matter-of-factly admits how the term is used.  Shulamit Aloni, an ex-Palmach fighter and Israeli Knesset and cabinet member, gave an interview to Amy Goodman on Democracy Now.  To Goodman’s shocked face, Aloni said:

The “trick” would be used, for example, if you oppose Israel’s full-time illegal military occupation of Gaza, punctuated every couple of years by a good phosphorus bombing, incinerating children to a crisp in their schools and in their beds.  (Now, that’s a Holocaust.)

In other words, if you disagree with the violent domination and ongoing bloody genocide of Palestine by foreign Israel (2019 is the 71st anniversary of this ongoing true Holocaust), you “hate” Jews.  If you advocate the right of the German people to defend their post-war reputation, or the right of any people to defend their reputation against abuse by red smears like “far right”, “white supremacist”, “white privilege”, etc., which all rolled into one are now practically equivalent to “anti-Semite” ― as we will see below ― then the “trick” will be used to smear you.  On the other hand, if you are a Jew who opposes all of this, you may be called a “self-hating Jew”.

That is how the term is currently used, as a political weapon to terrorize the world into enduring and tolerating lies, genocide, civilization suicide, and hyper-control of the rest of us by a handful of Jews who can murder or mass-murder anyone they like at any time with the help of our far-out evangelical, freemasonic, patsy “liberal” governments.

Adrien Arcand published an editorial in the May 23rd, 1930 issue of his Goglu newspaper entitled “Why Semitism is a Danger” in which he defines what he meant by the word “Semitism”.  We therefore know what Arcand meant by “anti” semitism.  However, it is too bad Arcand chose a word that already had a definition, one the media and the left have persistently attached to him:  “Relating to or characterized by anti-Semitism; hating Jews”.

I decided to find out where the term anti-Semitism came from.

The Origin of the term “anti-Semitism”

A search for the origin of the word “anti-Semitism” in an online etymological dictionary yields up something less than a definition and more in the nature of political exploitation of a dictionary for an agenda.  Etymonline has included anti-nationalism in its litany of pejoratives to refer to the man it says authored the term “anti-Semitism”.  Etymonline’s politically loaded etymology of “anti-Semitism” claims the term dates from 1881:

Just look at all those pejoratives in relation to an “anti-Semite”:  “German”, “radical”, nationalist and “race agitator”!

At least Etymonlone makes clear that anti-nationalism is directly connected with Jews (it certainly is:  “cultural pluralism” (multiculturalism), the method of destroying the nation-state, was invented by a Zionist in 1915:  Horace M. Kallen).  What Etymonline does not explain is how Jews themselves end up with a nation-state without being called “radical” “nationalist” “race-agitators” — which they absolutely are!

The terrorism is everywhere.  It is now in your dictionary, rewritten for you by the Ministry of Truth, where armies of Winston Smiths (וינסטון סמית ‘) now busily “rectify” all past news to accord with “truth” as held by the Party.  You can look up your mental and spiritual terrorism, your anti-white ethnic terrorism, your psychological warfare against nationalism in a “dictionary” perverting our languages for left-wing mind control.

“Not etymologically restricted to anti-Jewish theories, actions, or policies, but almost always used in this sense.  Those who object to the inaccuracy of the term might try Hermann Adler”s Judaeophobia (1881).  Anti-Semitic (also antisemitic) and anti-Semite (also antisemite) also are from 1881, like anti-Semitism they appear first in English in an article in the “Athenaeum” of Sept. 31, in reference to German literature.  Jew-hatred is attested from 1881.  As an adjective, anti-Jewish is from 1817.”

“Judaeophobia”:  Arcand might have saved himself a little misery with that one.

Etymonline believes that Anti-Semitism means “Jew” hatred.  That, however, is not how Adrien Arcand used the term.  Arcand defined Semitism as everything Talmudic Jews do and believe that is antithetical to the existence and well-being of non-Jews in general, and to Arcand’s Catholic Quebec in particular.  The prefix “anti” then simply means hatred or dislike for things Jews do because of what they believe and that are harmful to other peoples.  It does not mean hatred for Jews as human beings.  Arcand was a devout Catholic who opposed hate, as the diametric opposite of Christian civilization.

In other words, the quite Catholic Mr. Arcand believed the Jews would convert and rule the world under Christ … because Christ had said so (above) in the New Testament.  Arcand therefore could hardly hate Jews as human beings.

Eight years after this Goglu editorial, in 1938, Maclean’s magazine captioned a photo of Arcand with the statement:  “He hates Jews”.1  Would Maclean’s have reconsidered, had they read Arcand’s editorial in English … for the first time, below?

“WHY SEMITISM IS A DANGER”

1.  See Part I of “Fascism in Canada”, a very unfriendly but quite well written article by Frederick Edwards, published in Maclean’s magazine on April 15, 1938; Part II was published on May 1st, 1938.  Nonetheless, the article has some very interesting background on Arcand and his National Unity Party of Canada.

2. Adrien Arcand did not understand constitutional law. The electorate cannot vote to confirm or repeal an unconstitutional law, the law is void if unconstitutional. A court action is required to declare it void. In this case, he is referring to an unconstitutional law of the Quebec legislature under the Liberals which purported to deprive the French-Canadians in Quebec of their exclusive right to self-government under their own Legislature. The Liberals had given Jews coordinate ethnic rights, which destroys Confederation by re-federating Quebec internally while giving Jews competitive control of Quebec law-making, which violates the Constitution. Canada was federalized in 1867 to give each of the founders (ethnic majorities in each former colony being federated) their own legislature for local self-government to preserve their own culture.

3. By “race”, Arcand means the French-Canadians in Quebec.  (The French-Canadian race is found all over Canada, North America, and the western hemisphere.) The Catholic Church had always been their great protector and defender.

Subscribe and share! Every now and then, you’ll get a piece of my mind, and a free eBook. 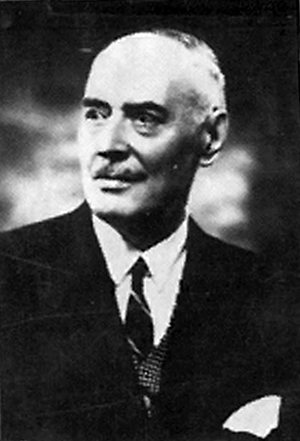 We are a Heritage Site1

IN THE QUEBEC ARCHIVES

Down With Hate! Book Preview 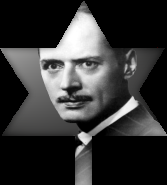 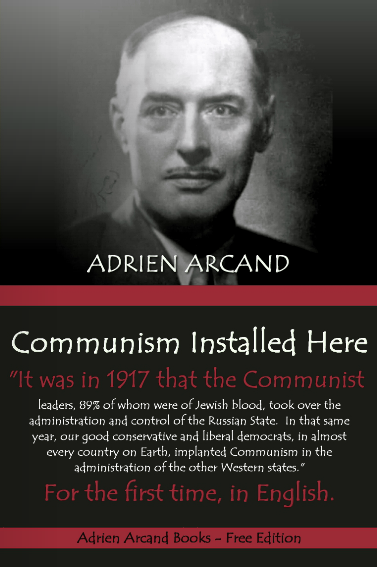 New!  Free downloads tab on the top menu. Several short works by Arcand are now in English, and more to come. Subscribe and check back!

The best service that commissioners Max Cohen and Saul Hayes could render to the Jews and … Gentiles in their report on “hate literature” would be to recommend that the Canadian government prohibit all distribution and teaching of the Talmud in our country. The Talmud is a one-way street, but I hope the commissioners will not be.

If it were possible, to at last have the peace that so many Jewish writers say is ruled out, I would readily admit that the Savior of men was killed not in Jerusalem but in Montreal, that He was crucified not on Golgotha but on the Champ de Mars, that His death was decreed not by the Sanhedrin but by the Saint John the Baptist Society, that He was sold for thirty pieces of silver not by Judas Iscariot the Jew, but by Tipit Latrempe of Sauvageau Street, that His sentence was pronounced by some English governor who placed … law, order, peace and discipline above all.  But I know that such a confession, even made in the friendliest and most kind-hearted spirit, would not be enough.

“Every generation
has the right to verify the alleged facts of history for itself.”